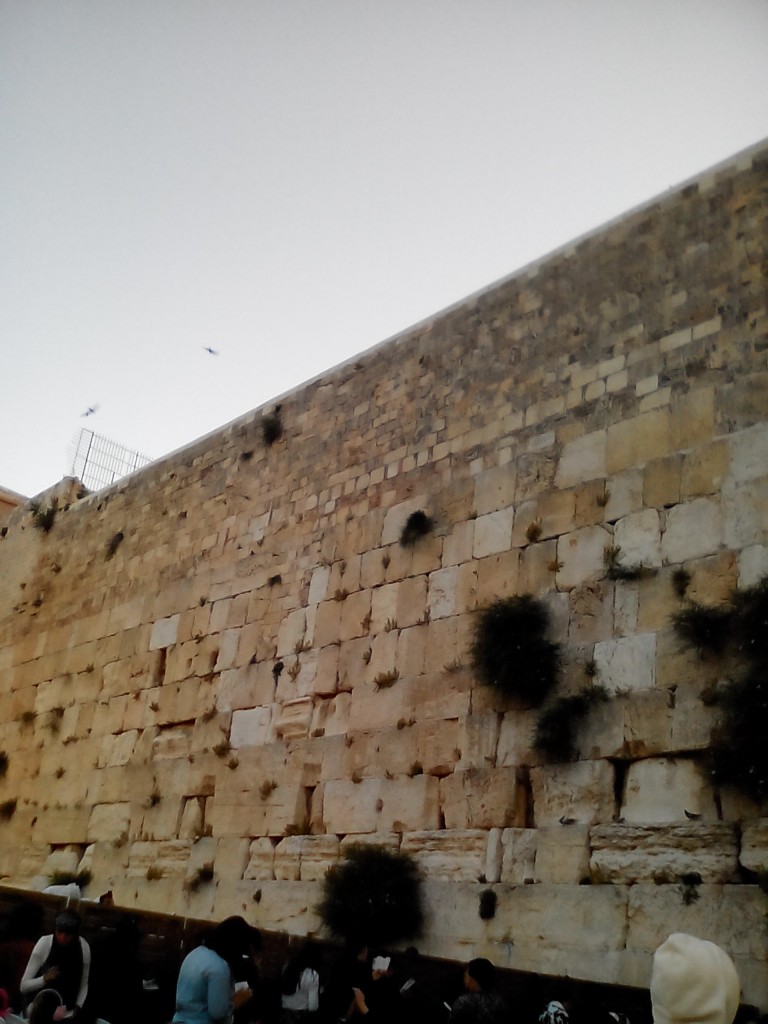 The Kotel, Western retaining wall of the Temple Mount, the holiest site that Jews are permitted to pray at

Around 4 AM Sunday, I woke up thinking, “I should go to the Kotel.”

It was Yom Yerushalayim, Jerusalem Day, the day that commemorates the reunification of Jerusalem. For nineteen years, the Old City of Jerusalem had been in the hands of the Jordanians, and no Jew had been allowed to enter. For nineteen years, we had been denied access to our holiest site. On 28 Iyar 5727, corresponding to June 7, 1967, the Jewish world thrilled to the voice of Colonel Motta Gur on the radio. “Har haBayit b’yadenu,” the Temple Mount is in our hands. The paratroopers had entered the Old City of Jerusalem and recaptured it from the Jordanians.

A week later, thousands of people celebrated the festival of Shavuot by coming to Kotel, the Western Wall of the Temple Mount. It is the closest we can get to the site where the Temple once stood.

The Kotel is a short bus ride from our apartment. It seemed only right that I would start the day marking its return to Jewish hands by saying my morning prayers there.

The first Line 1 bus to the Kotel leaves the Egged parking lot daily at 4:40 AM. I had just enough time to get dressed, stuff my pockets with necessities, and walk to the bus stop. Necessities include my small siddur (prayer book), change for tzedaka (charity), bus pass, tissues, and phone. Putting everything in its assigned pockets took longer than dressing did.

I made it to the bus stop with two minutes to spare. Three women were already waiting there.

The bus wound its way through several religious neighborhoods, gradually filling up. About two-thirds of the passengers were women, many of whom started their prayers while on the bus. So periodically, we would answer “Amen” to blessings said loud enough to respond to. There is a tradition that we should say “Amen” one hundred times every day, a number difficult to attain if, like most women, you don’t pray in a synagogue three times a day. Some women make a practice of saying the fifteen morning blessings in the presence of other women to give them a running start on their daily one hundred. By the time we reached the Kotel, I had said “Amen” more than forty times.

As we approached the Damascus Gate to the Old City, the bus stopped. The Damascus Gate is the only one in the city walls that you approach by walking walk down steps. The steps are broad and arranged in a U-shape. Hundreds of young men sat on the steps on the two arms of the U. I counted about a dozen large Israeli flags. The woman next to me looked at the traffic and said, “It’s Yom Yerushalayim. It’s going to be a balagan.”

Balagan is a word Israelis borrowed from the Russians, who seem to have taken it from the Turks. It means messy or chaotic, in the sense of the Ringling Brothers three ring circus in your living room the day the rug cleaner is there and the teachers’ union is on strike.

By the time we arrived at the Dung Gate, the one closest to the Kotel, we were not surprised the bus had to wait before entering. But eventually it was allowed in, and we descended at the regular bus stop. Security was efficiently feeling women’s purses and tote bags. The line at the women’s entrance moved forward quickly.

While crossing the Kotel plaza, I took a quick peek at the men’s section. White plastic chairs were neatly arranged in rows from the Kotel all the way to the back of the prayer section. About three-fourths of them were occupied.

In the women’s section, chairs were scattered in a rough approximation of rows. Women occupied less than a quarter of them. I found a seat close to the Kotel and continued my prayers from where I had left off earlier.

About half way through the central Amidah prayer, I started crying, which surprised me. Not the tears themselves—I cry almost every time I go to the

Kotel. I cry in memory of my parents and grandparents who never had the chance to pray here. I cry for the soldiers who lost their lives to gain us the right to be here. Or for the future of the country, and what my grandchildren might have to face. Or for some those on my list of the sick in need of healing. I just don’t remember ever crying while saying the Amidah.

While I was praying, periodically I recognized a tune wafting over from the men’s side. They were all tunes from the Hallel, the Psalms said in praise of G-d for a miracle.

The recitation of Hallel on Israel Independence Day and Yom Yerushalayim is controversial. Several Chief Rabbis of Israel have endorsed saying it on these two holidays. They feel the establishment of the state and the reunification of Jerusalem could not have happened without direct intervention of G-d.

However, some of ultra-religious hold that Hallel should not be recited because these events were the work of man. The State of Israel should not be celebrated; rather we should wait for the Messiah to arrive and establish it.

Allen and I recite Hallel on both holidays. We look around us, and see ourselves surrounded by many Arab and Muslim countries that wish to destroy us. We agree with David Ben Gurion, who famously said, “In Israel, in order to be a realist, you must believe in miracles.”

When I finished saying the morning prayers, I went forward and leaned my head against the wall. Its stones were cool and smooth against my forehead and under my fingertips. After saying a few private words, I left the prayer section of the Kotel plaza, walking backwards so as not to turn my back on the holiness embodied there. I gave tzedaka to several of the women begging for coins, and put a few more coins in the box dedicated to maintenance of the Kotel.

I watched the swifts flying in circles above the worshipers, and the doves nesting in niches high on the wall. The caper bushes growing in the wall have small white flowers at this time of year—I had never noticed them before.

I joined the stream of people leaving the Kotel plaza. For every one walking away, three or four were coming in. It was 6:00.

I felt at peace.

Entrance to the Kotel Plaza