The Dan River at the end of a good winter

Allen and I went to Tel Dan with my class on Kings I to see one of the religious centers for the people of the Kingdom of Israel. After the death of Solomon, the Davidic kingdom was split in two. His son Rehavam ruled Judea in the south and Yeravam I (Jeroboam) ruled Israel in the North. Yeravam established two cultic centers to keep the people in Israel from returning to Jerusalem to pray at the Temple. One of the cultic centers, with a golden calf and an altar, was built in the city of Dan, which sat on high place along the Dan River.

For most of the year, rivers in Israel are small sluggish streams. But we were at Tel Dan in late March, at the end of a winter of good rain, and the Dan River was noisily rushing. We walked along the river for some distance and I was amazed. It was the first time I had ever seen a rushing stream, flowing through woodlands, in all my time in Israel. It felt more like the Appalachian mountains of Pennsylvania than the foothills of the Mount Hermon.

The Dan rises from the largest karstic spring in the Middle East, in the highlands of the northern Galil. Even in dry years it has a decent flow–approximately 230 million cubic meters a year. That’s close to 608,000 gallons, enough water to supply six average American households for a year. The Dan joins the Banias and Hasbani Rivers to form the Jordan just north of the Hula Lake. The Jordan then drops below sea level to flow into Lake Kinneret (Sea of Galilee). It remains below sea level for the rest of its length, down the rift valley into the Dead Sea.

The city of Dan has a long history. It was built on the site of the earlier city of La’ish. La’ish or Dan is mentioned several times in the Bible, in the books of Joshua and Judges, as well as in Kings.

After 1948 Tel Dan was within Israel, on the Syrian border. Because of the danger of Syrian attack, archeologists did not explore the site. But in 1966 people who lived in the area noticed the IDF digging defensive trenches near the Dan River. They called the archeology department at Tel Aviv University and notified them, pointing out that the IDF did not care about antiquities. If the past was to be uncovered and saved, some trained archeologists needed to come north quickly.

Avraham Aviram organized the 1966 excavation and continued to explore the archaeological site at Tel Dan for the next 40 years, until his death. Even today, we do not know exactly how large the city was at its peak. Dan was probably not a government center, but it was an important city on the border, and a cultic center. But excavations are continuing, and the city’s borders may yet be discovered. Even without knowing the city’s size, we have learned many fascinating things from the digs here.

In one spot, a deep pit reveals the first layer of the city, from the era of settlement in the time of Joshua, about 1400 BCE. Part of a victory stela (inscribed stone slab) was also found, carved in ancient script. The stela dates from about 50 years after King David (around 850 BCE). Although much of the inscription is missing, what remains is significant. On the stele, the King of Aram boasts of having beaten the armies of his two southern neighbors, and killing the kings of Israel and Judea. According to current thought, the stele celebrates the victory of Hazael of Damascus over King Jehoram of Israel and King Ahaziah of Judah. What makes the stele important is that is the first written reference to the Davidic dynasty outside the Bible.

The major importance of Dan lies in its role a cultic center. Cultic centers tend to retain their holiness even when the governing culture and religion change. For example, the Temple Mount, has successively housed the Jewish Temple, a Roman temple, a mosque, a church, and today another mosque. At Megiddo, several different types of altars have been found in one small area.

So too at Tel Dan. Today the cultic site is a symbol of idolatry and the breakup of David’s kingdom. Archeologists have uncovered layers at this high place from the time of King Yeravam I, King Ahav, and the Greeks. We saw the foundations of a large square altar, topped by the metal outline erected to show the dimensions of the original altar. It was much larger than the other altars I’ve seen in Tel Arad, 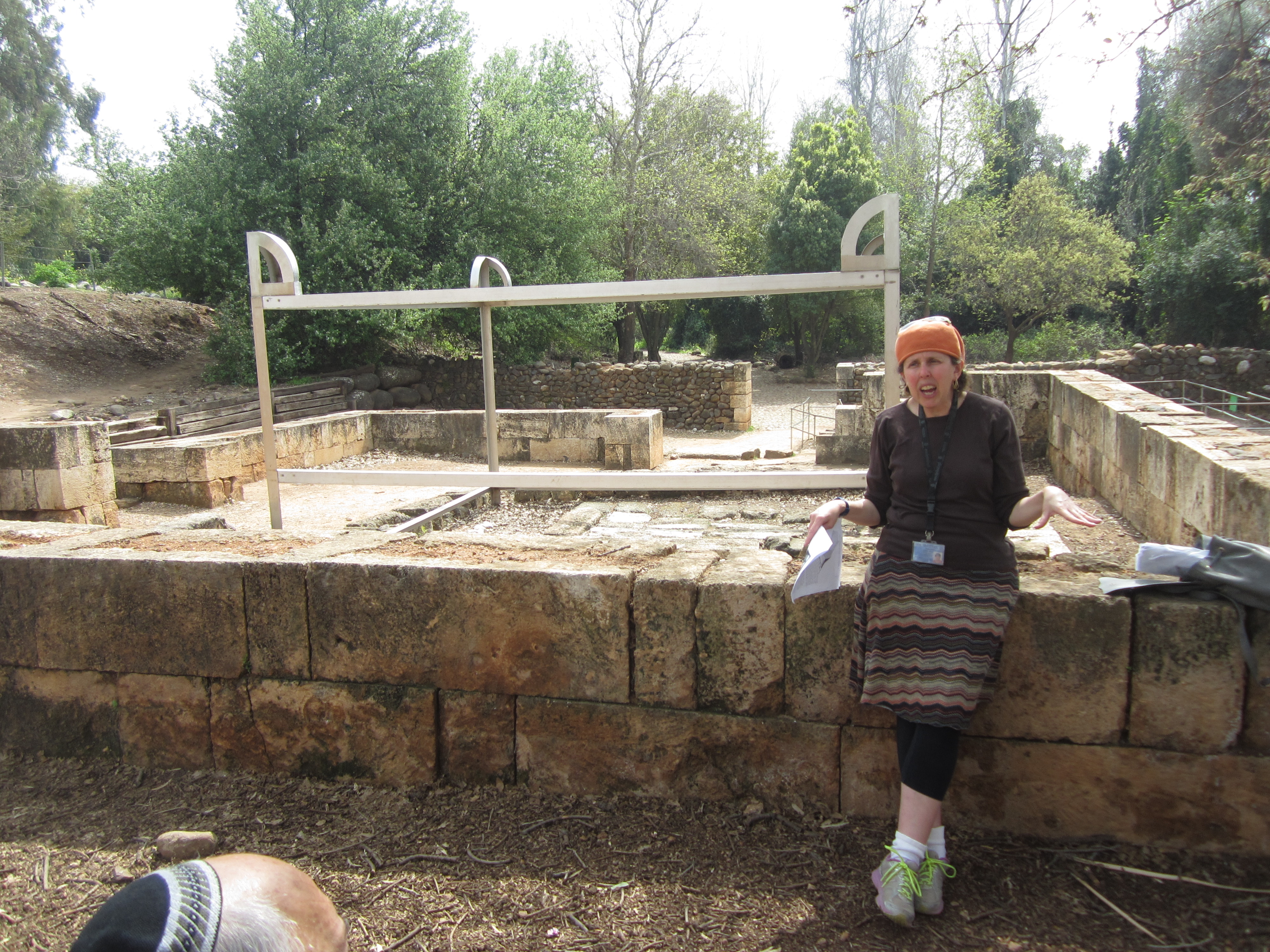 Shulie Mishkin, our guide, at the Jewish altar on Tel Dan

Tel Sheva, and the Israel Museum. It stands within a square courtyard, surrounded by small rooms whose function is unknown. Perhaps the small rooms were where the sacrifices were prepared. Or maybe the priests changed their clothes in them. On one side of the altar complex are earthworks and stone steps on which the people probably stood to watch sacrifices. It is also on the east end of the tel, as altars were in those days.

From the high place we turned and walked south to the Israelite period gate. Like many remains from ancient times, the gate shows an amalgam of history. Part of what can be seen today is the original gate and part of it is from King Ahav’s rebuilding (both from First Temple period). Part of the gate dates from the Greek (Second Temple) period.

Gates were significant places in earlier time. Much of the life of the city occurred here. They were a major site for commerce—we read of Abraham buying the Cave of Machpelah at the Hevron city gate. This is where the Judges and elders sat, as we read in the Book of Ruth. Traders conducted their business at the city gates. As evidenced by a small altar nearby, gates were also religious sites. Travelers could offer a small sacrifice to thank the city’s god for bringing them safely to their destination.

From the Israelite gate we walked downhill and to the east until we arrived at the older Canaanite gate. This section of the archaeological site was discovered only ten years ago. It was identified as being of Canaanite origin from two characteristics. It is outside the Israelite gate. It is built of the Canaanite mud bricks common in the 18th century BCE. When the Israelites built their gate, they filled in the opening of this one because it was no longer needed. Thus it was preserved through the centuries of earthquakes and neglect. 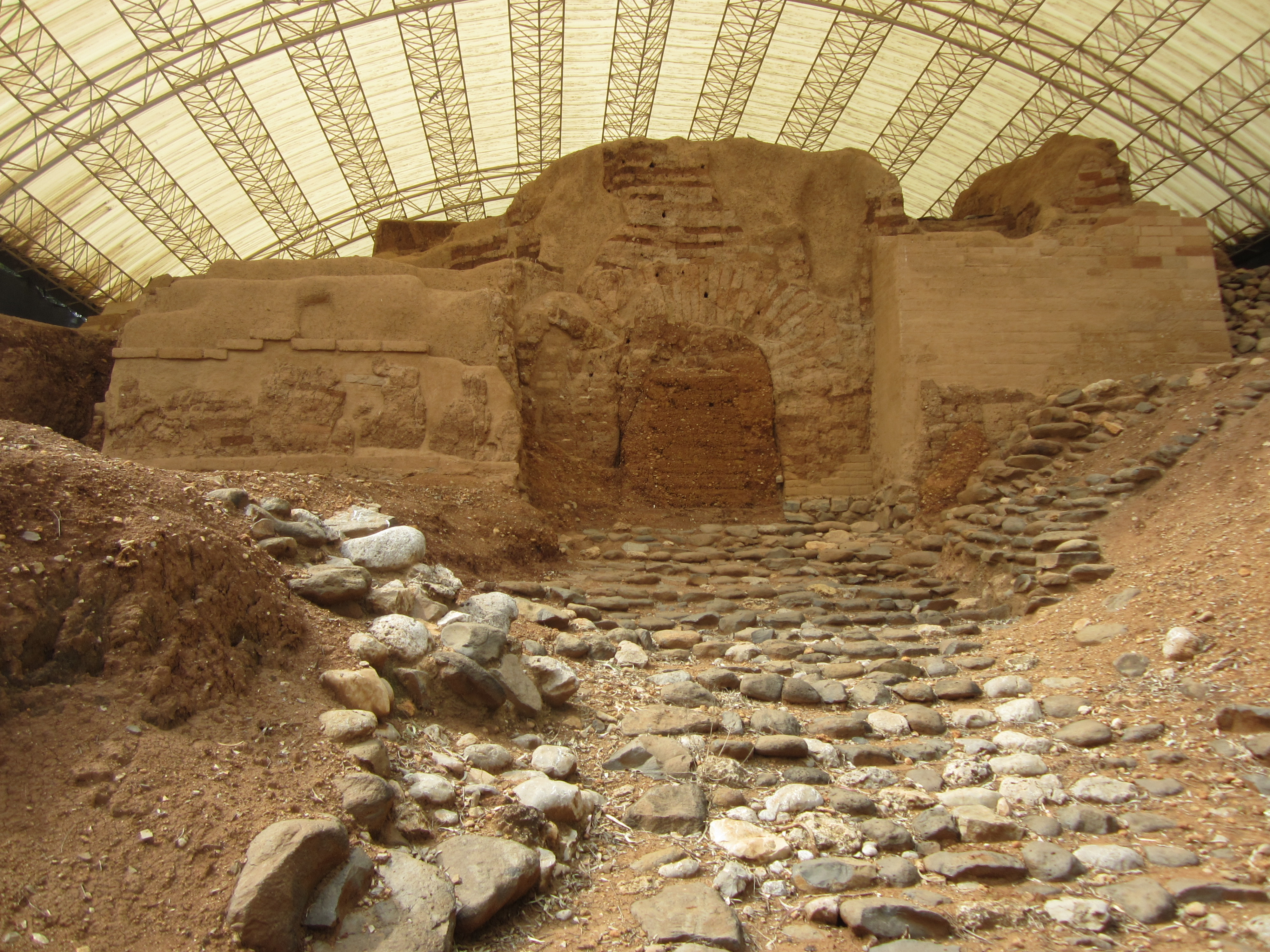 The most remarkable thing about the Canaanite gate is its shape. It is an arch. Until this gate was discovered, intact, many people thought the Romans invented the arch. (The Romans may have learned about arches from the Etruscans.) But here at Tel Dan, stands an arch built between 1550 and 1800 years before the earliest Roman one. Canaanite arches had previously been found in Ashkelon and Gezer, but the Dan gate is the first complete arch that has been found.

In unearthing the past of this land, archaeologists are changing our understanding of the past as well. History does not remain static. In walking the land, our conception of the past continuously changes.

Where the archaeological site is located: